It feels like a very long time since I’ve written a blog post. I can’t believe it’s been a month. I really wanted to post every week but this course is so busy that I’m not sure I’ll be able to do that. I’m thinking every two weeks is a reasonable goal.

I think I fell off the blog bandwagon in week 6 because that was our reading week and I read so much I thought my brain was going to explode. The last thing I wanted to do was write.

Every time over the last month I sat down to write a blog post I realised I could be doing something else instead. Something more productive towards the course. The course has been ridiculously intense so far but again, I’m loving every second of it.

Here’s a short list of topics/authors I’ve been studying these last four weeks if you are interested to look up any of these texts:

Some of them I thought I would never be able to understand but the seminars are very open and the discussion is great so there is really never a wrong answer to something you want to say.

In particular there have been three key aspects that have been keeping me busy.

1) We have had to produce a short film for our course.

This is instead of a presentation at the beginning of the year because there are so many of us it would take forever. This way we can learn about each other’s practices in our own time without it taking up precious studio time. We were given the option to have one of the postgraduate students film this and edit it for us, but me being my overly eager self wanted to have the challenge of doing it alone. I created a short film for my Panmure series back in 2014 and I remember really enjoying the editing process. This took a couple of weeks though I filmed some of the footage during reading week (week 6). It was a bit strange getting used to hearing your own voice but by the end I was pretty happy with what I created. I’m hoping to be able to share the video with everyone that follows my blog in the near future once it has been uploaded to Vimeo. I can probably share a screenshot just now though:

My creative practice has been practically exploding in the last couple of weeks. Every time I went to write a blog post my mind said NO! Go and create something instead! I was speaking about this with a couple of people and it is strange how I could take some photographs even if I wasn’t in the mood to. In contrast when it comes to drawing you definitely have to be in the mood to draw, and you can’t really force yourself to create anything if you don’t want to. The last time I updated everyone I wrote about the transition to using a hand etcher from the laser cutter. My studio definitely looks different from that time too:

As you can see I’ve moved back to a more monochrome palette. This was just a natural transition from using inky materials. I’ve been doing a lot of printing, ink studies, pen sketches and just generally enjoying the making process. This is something that I mentioned in the film. I’m enjoying the process and not worrying about what the final outcome is going to be. I think this is allowing me to be far more free in my work than I have ever been. Not only am I enjoying hand etching but I am enjoying just ordinary drawing. I have been looking into meditation and automatic drawing, being really present in the work and that is the direction I’m taking it in. Abstract automatic drawing is something I never thought I would be interested in but I am really loving it. Here is a gallery of some of the projects I have been working on. Most of these are on my Instagram which you can click here to see and follow if you haven’t already. 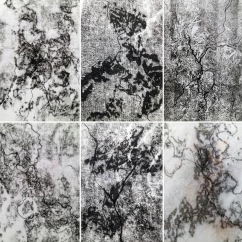 The dreaded E word! I don’t really mind writing essays but I tend to procrastinate. A lot. I guess I feel a bit of pressure in writing this one as it is my first postgraduate piece of writing and there is an expectation that it will be higher quality than undergraduate writing. I’m not sure how much I’ve improved over the summer seeing as I came straight from an undergraduate course so I guess we will see how it turns out. The topics we were given were quite interesting though and I’m writing about how the Humanities modules have influenced my creative practice, specifically assisting in my transition from photography to drawing. So a great subject but again I tend to put off these things until last minute… speaking of which I should probably get back to writing.

I finally managed to do some form of update! I will definitely try and do two week blocks from now on (although don’t hold me to it) so next weekend I will be discussing weeks 9 (this week) and 10. See you then…