This week has been a strange one. I feel like I kind of worked on little parts of everything. Monday was a strange day, I ended up coming in early in the hope that I would get the second screen fitted onto my maquette but the Make Lab was too busy so I did some small tasks instead. I wrote down all the sentences that I want to work on for my wall piece for degree show and now have them displayed on my wall.

On Tuesday I had a tutorial with Louise which went well, she gave me tips on how to protect my acrylic once I have it etched – which, to be honest, I hadn’t even considered. She has suggested that I speak to Arthur Watson about the text pieces as he works with text quite a lot, so i’m seeing him for a tutorial tomorrow.

On Wednesday I finally got the second screen of my maquette finished, and it looks better than I imagined with the double etching. That same afternoon I had 5 more pieces of my large acrylic delivered to my studio, it’s so huge that I have to take it in the lift everywhere to save my poor arms :(

Thursday and Friday were spent etching the large pieces so I now have almost two large pieces done (just another 4 to go D:)

So here’s to next week, hoping to get some more etching done and some sketchbook work! 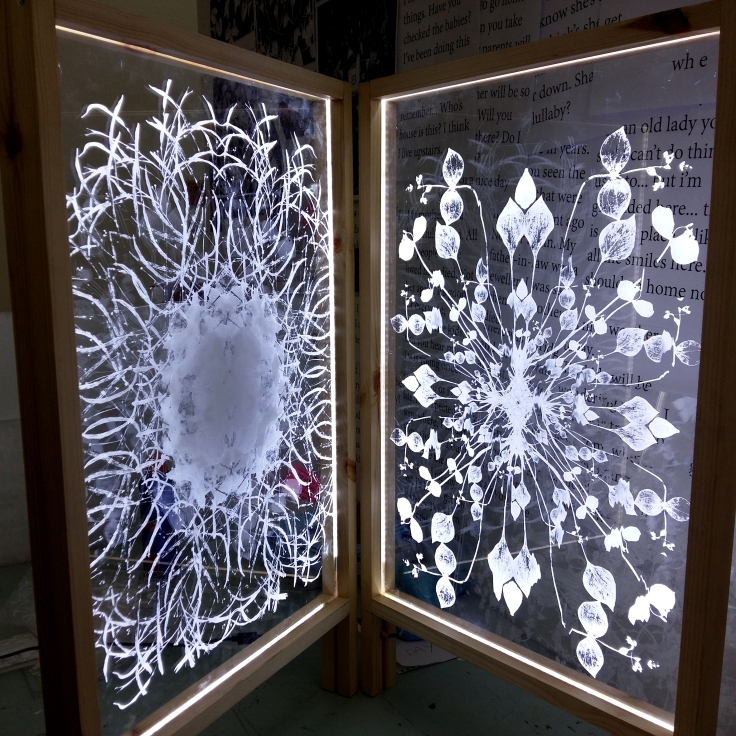 Second screen of the maquette finished – a double etching this time.

My final etchings are so big I have to take them in the lift – no carrying them up the stairs!

One of the final etchings – almost as big as the laser cutter!

How my studio space is looking just now.